This edition of Glance determines whether the U.S. is in a recession and what that means for Houston.
Share
September 2022 Economy at a Glance

Three questions dominate any discussion about the economy these days. Is the U.S. in a recession? If not, how likely are we to end up in one? If the U.S. slips into a recession, will Houston follow? This issue of Glance attempts to answer those questions.

Is the U.S. in a recession?

One rule of thumb holds that the U.S. is in recession when real gross domestic product (GDP), declines for two consecutive quarters. GDP declined 1.6 percent in Q1/22 and 0.6 percent in Q2/22. 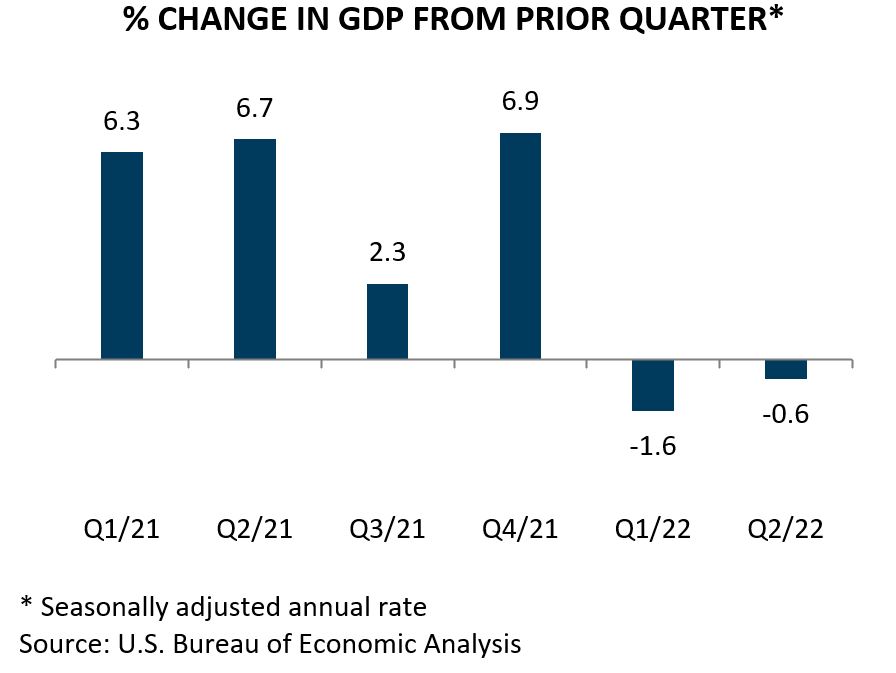 There are problems with that rule of thumb, however. For one, GDP is frequently revised as additional data becomes available. The Bureau of Economic Analysis (BEA) originally reported the economy shrank 0.9 percent in Q1/22 only to revise that to 0.6 percent in later reports. Better data on consumer spending and inventory investments forced the revision. As more data is available, the decline could shrink further or be revised away entirely. Years from now the BEA may still be revising Q1/22 GDP.

Second, negative outliers can overshadow strength elsewhere in the economy. For example, government expenditures are part of the GDP calculations. Several federal programs designed to assist businesses and individuals during the pandemic expired or tapered off in Q1/22, dramatically reducing government’s role in the economy. That contributed to the negative GDP calculations in Q1. 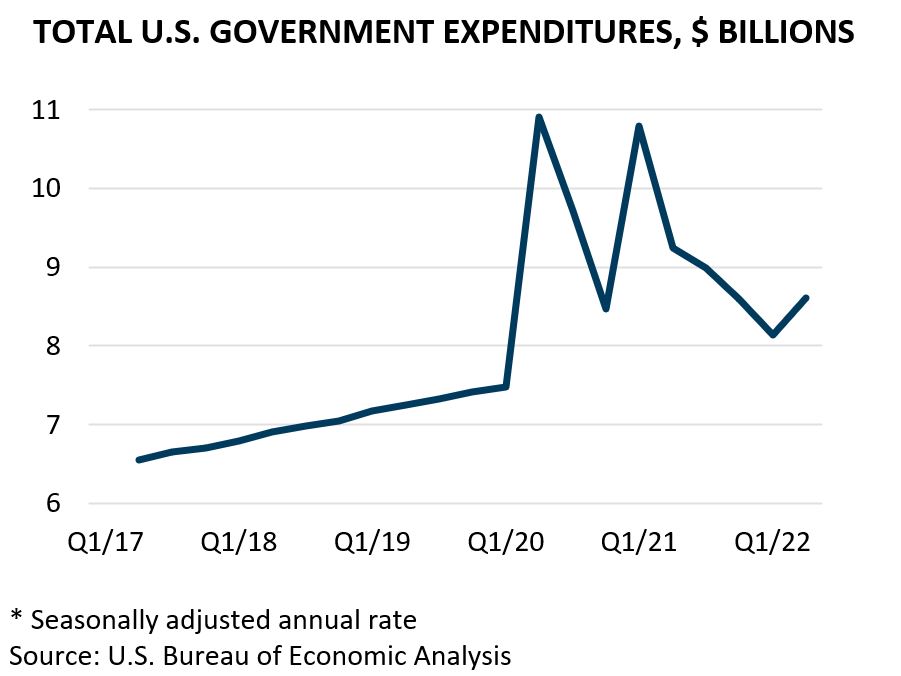 BEA also subtracts the value of imports from exports in calculating GDP. Over the last 10 years, this has typically subtracted 0.5 to 1.5 percent from growth. But imports were extremely heavy earlier this year as businesses rebuilt inventories. BEA estimates net imports subtracted 3.2 percent from GDP growth in Q1/22. If trade had been at a normal level, GDP growth would likely have been positive.

And lost in the original GDP report were signs of strength in the economy. Consumer spending grew 2.7 percent in Q1, business investment was up 7.3 percent, and residential real estate investments expanded 2.1 percent at seasonally adjusted, inflation-adjusted, annualized rates. These performances suggest an expanding, not a contracting economy.

Furthermore, relying solely on GDP to assess the health of the U.S. economy ignores other metrics, like job growth and industrial capacity utilization. For example, the nation has added 3.5 million jobs through August of this year, almost double the annual growth rate. And industrial capacity utilization was at 80.3 percent in July, the second highest level of the past 10 years. Those metrics don’t suggest an economy that’s in recession. 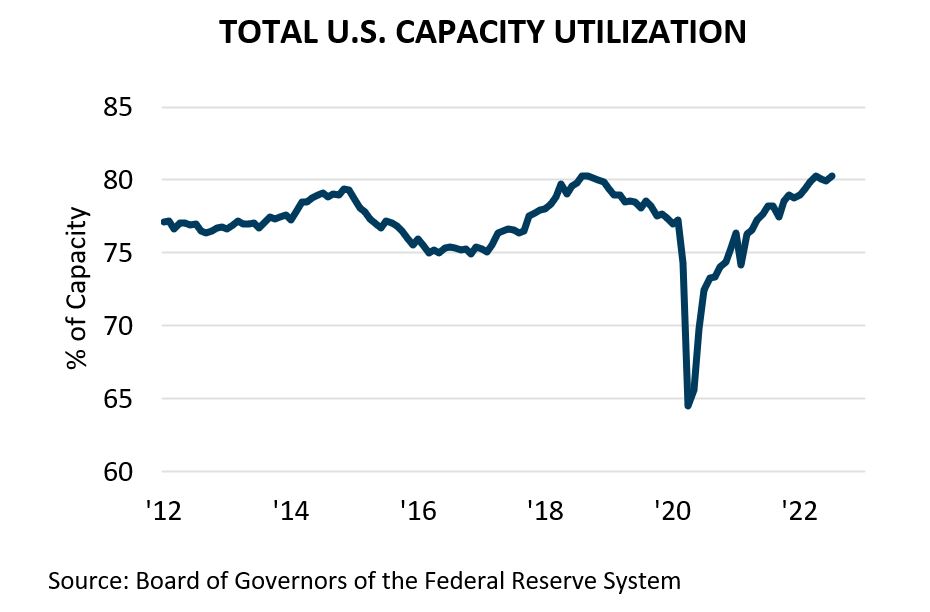 Most economists rely on a definition developed by the Business Cycle Dating Committee of the National Bureau of Economic Research to determine if the nation is in a recession. According to the committee, a recession is:

". . . a significant decline in economic activity that is spread across the economy and that lasts more than a few months."

Specifically, the committee looks for declines in personal income, employment, consumer spending, retail sales, wholesale trade, and industrial production when determining if the U.S. is in recession. They also consider the depth, duration, and diffusion of any declines as well.

The most current data for the NBER metrics suggest the economy is expanding, albeit more slowly than earlier in the year. Job growth remains healthy. Consumers continue to spend. U.S. industrial production is trending up. Income growth has slowed but not declined. And retail and wholesale sales have slipped only marginally.

The best indicators, or at least the ones easiest to comprehend, are those tied to the workforce. Are employers hiring? How many open jobs do employers need to fill? Have layoffs picked up? If someone has lost their job, are they having difficulty finding a new one? The answers to these questions indicate the economy is still expanding. 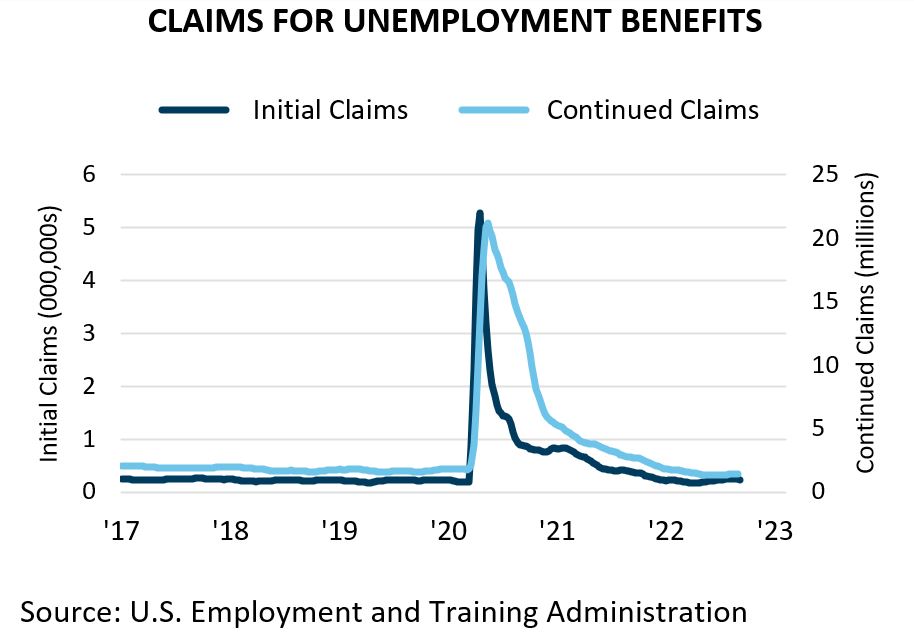 Dive deeper into the insights in this report, by listening to the Bayou Business Download.

Get updated articles on what's happening in Houston's business community.

From world-class museums to international cuisine, find out what makes Houston a great place to live.

Get Economy at a Glance Delivered Monthly

Join the Houston: Economy at a Glance mailing list to get each month's edition sent directly to your inbox

Here are the facts to know about the Houston region this month
1
September Takeaway #1
The U.S. added 2.6 million jobs in Q1 and Q2 of 2022, more than the average annual job growth of the past 10 years.
2
September Takeaway #2
Houston's economy is growing faster than that of the nation, which could mitigate losses and accelerate recovery in the case of a recession.
3
September Takeaway #3
Metro Houston employment is still strong, with 900 jobs created in July '22, compared to the typical July loss of 15,000 to 20,000 jobs.
Like this article? Share with your network

Previous Issues of Economy at a Glance

Review the latest data on inflation in the Houston area.