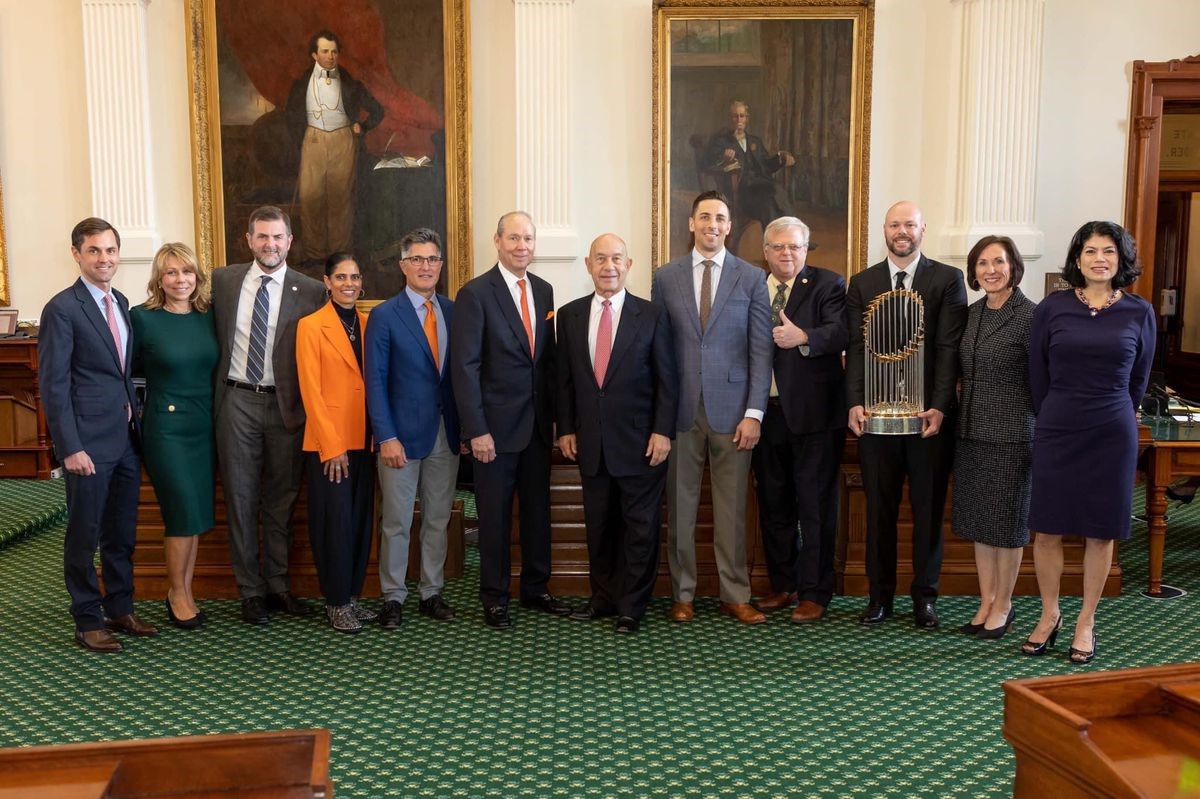 This week, Governor Abbott and Lt. Governor Dan Patrick were sworn in for their third terms and the House and Senate released their budgets. The Partnership provides a breakdown of budget items related to its Executive Priorities.

On Tuesday, Governor Greg Abbott was sworn in for his third term becoming the second longest-serving Texas Governor.

The Governor’s inaugural address emphasized “Texas Exceptionalism,” highlighting the state’s historic budget surplus and our position as the economic leader in the nation.

During the address, Governor Abbott pointed to policy priorities for the legislative session, including:
•    Improving power grid infrastructure
•    Addressing parental rights in schools and public safety
•    Carrying out the “largest property tax cut in the history of the state of Texas”

What's next: The Governor is set to formally lay out his priorities for the state’s legislature in the form of emergency items which will be announced during his upcoming State of the State address.

Lt. Governor Dan Patrick was also sworn in for a third term during the inauguration day festivities. Like the Governor, he highlighted strengthening the power grid, parental rights, infrastructure, and property tax relief as top priorities.

Why it matters: Both inaugural speeches contribute to setting the tone for the session and send strong signals about the issues most important to both statewide leaders.

On Wednesday, the House and Senate released their preliminary budget proposals for the 2024-2025 biennium.

Senator Joan Huffman (R-Houston), Chair of the Senate Finance Committee, and Representative Dr. Greg Bonnen (R-Friendswood), Chair of the House Appropriations Committee, both introduced proposals spending nearly $289 billion, including an unprecedented $130.1 billion in general revenue. The proposals stay within the state’s statutory and constitutional spending limits, and neither appears to dip into the state’s rainy-day fund.

The proposals may differ in some of the details, but both versions include:

Both proposals leave tens of billions in funding unallocated and given the unprecedented nature of the historic budget surplus, the proposed budgets will go through many changes over the next few months before final passage. The state’s biennial budget is the only bill the legislature is required to pass each legislative session.

Go deeper: In the coming weeks, we will examine important issues like public education and how each fared in the base budget. View the entire 1,000+ page budget proposals available online at SB 1 and HB 1.

Partnership’s top priorities in the budgets

The Partnership’s top priorities in 2023 were reflected in the base budgets released by the Texas House and Texas Senate.

Both House and Senate proposed budgets include full funding for two of the Partnership’s top education priorities:

Both House and Senate budgets allocate $400 million to the Texas Water Development Board (TWDB) for flood mitigation funding.

Yes, but: Key state leaders have publicly called for FIF to receive billions in re-investment. The budget allocation to TWDB is important, but significantly more funding into FIF is necessary to meet the flood mitigation needs of local communities throughout southeast Texas.
Flood Mitigation: Coastal Texas Program

Both House and Senate proposed budgets allocate $300 million to the Gulf Coast Protection District (GCPD) to provide a state match for the program (Coastal Spine/Ike Dike). The state funding is expected to cover the 35% federal match necessary to begin construction on the project.

Why it matters: The magnitude of this project exceeds the financial capacity of local governments. Without financial resources from the state, the project would not move forward.

Lawmakers took some time to celebrate the World Champion Houston Astros, with both the House and Senate passing resolutions honoring the accomplishment and welcoming the team to the floors of both chambers.

This week, Lt. Gov. Dan Patrick announced Senate committee assignments, the Partnership highlighted the importance of a strong public school accountability system, and welcomed it's members to Austin to advocate for our Executive Priorities. Senate committee assignments announced Lt. Gov. Dan Patrick unveiled committee assignments with Houston-area Senators chairing several critical senate committees. Of the sixteen full committees, six will be chaired by Houston-area Senators.  Senator Joan Huffman (R-Houston) will chair the powerful Senate Finance Committee responsible for writing the state budget.  Senator John Whitmire (D-Houston) was reappointed chair of the Senate Criminal Justice Committee and will be the only Democratic Senator to lead a committee.  Why it matters: This committee will have jurisdiction over any potential criminal court expansion, which could address Harris County’s prevailing backlog. Senators Bettencourt, Huffman, and Miles will join him on the committee. Senator Brandon Creighton (R-Conroe) was named chair of the Education Committee, which will now oversee K-12 and higher education. Several priority issues will funnel through Creighton’s committees, including public school accountability, K-12 curriculum reforms, and community college finance reform.  One more point: Freshman Senator Mayes Middleton (R-Galveston) was appointed as vice chair of the Higher Education subcommittee.  Other notable Houston-area chairs and appointments: Senator Paul Bettencourt (R-Houston) will chair the Senate Committee on Local Government.  Senator Lois Kolkhorst (R-Brenham) will chair the Senate Committee on Health and Human Services. Senator Borris Miles will also join her on this committee. Senator Robert Nichols (R-Jacksonville) will chair Senate Committee on Transportation. Other Houston area senators joining Senator Nichols include Senator Carol Alvarado and Senator Borris Miles. The bottom line: Committee chairs influence what bills make it to the Senate floor and are viewed as strong policy leaders for the issues they oversee.  Go deeper: Click here to view full committee listings Preserving a strong public school accountability system is a top priority for the Partnership. This week, Taylor Landin, the Partnership’s Chief Policy Officer, led a panel discussion of education policy experts from Texas 2036 and the Texas Public Policy Foundation on the importance of accountability and assessments in order to produce students that are college, career and military-ready.  Our thought bubble: Without a strong public school accountability system and assessments, parents and communities are unable to determine which students are falling behind. And we know that if a child is not reading on grade level by the third grade, they are less likely to ever catch up academically.  Click to expand Bob Harvey at Partnership in ATX event The Partnership in ATX  The Partnership’s trip to Austin began with a Legislative Briefing on Energy, including expert panelists sharing their knowledge on energy transition, low carbon technology, and hydrogen before a packed room of legislative staff and policy thought leaders.  Panelists included:  Jeremy Mazur, Senior Policy Advisor, Texas 2036 Mark Klewpatinond, Global Business Manager, Hydrogen, Exxon Mobil's Low Carbon Solutions Carrie Lalou, Director, Business Development, Linde Gas US  The bottom line: Texas is uniquely positioned to lead the world in developing solutions to the dual challenge at the heart of the Energy Transition - how to meet the growing demand for energy while lowering global emissions. Leading the energy transition requires consistent legal and regulatory policy to create certainty, attract investment and accelerate project deployment.  An evening Legislative Reception brought together members of the Legislature, policy leaders, and the Texas business community to celebrate the Houston region.  Bob Harvey, President and CEO of the Greater Houston Partnership, addressed the crowd and outlined the Partnership's 88th Legislative Session Executive Priorities.  Austin Buzz: Dan Patrick announces re-election and energy report released What’s New: Days after his being sworn-in to a third term as the state’s Lieutenant Governor, Dan Patrick made public comments indicating he will “absolutely” run for a fourth term.  Worth a read: Texas Oil and Gas Association released its annual energy and economic impact report that provides data on the impact of the oil and gas industry on the Texas economy.  During the 88th Legislative Session, the Greater Houston Partnership will provide a weekly update on newsworthy items from Austin. You can view more policy news and archives of our weekly updates here.
Read More

The Greater Houston Partnership is heading to Washington, D.C. on February 28th - March 2nd, to advocate for the greater Houston region. This three-day event brings together members of…