About
/
Board of Directors
/
Brad Tucker 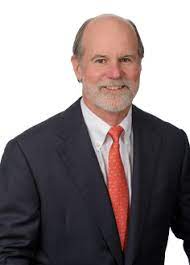 Brad Tucker is the President of Mustang® Cat, the Caterpillar dealership for Southeast Texas. He is the third generation owner of the heavy-equipment business, which was co-founded by his father in 1952.
In 1985, Tucker joined the company as General Counsel. He assumed the role of President and Dealer Principal in 2011 and has continued growing the company’s scope and influence within the heavy-equipment and power systems industries.
He also serves as the Chairman of the Board of Pipeline Machinery International, the Caterpillar dealer which provides equipment and support to the mainline pipeline construction customers operating around the globe.
Prior to joining Mustang Cat, Tucker practiced law at Wood Campbell Moody & Gibbs. He also has prior experience in public accounting at Coopers & Lybrand (now PwC).
He graduated with a Bachelor of Business Administration degree with high honors from Southern Methodist University and a J.D. degree from the University of Houston.
Tucker is very active in the Houston community. He serves on the Texas Children’s Hospital board of directors where he is a former President and Chairman. He is also a director of the Brookwood Community and the Rise School of Houston.