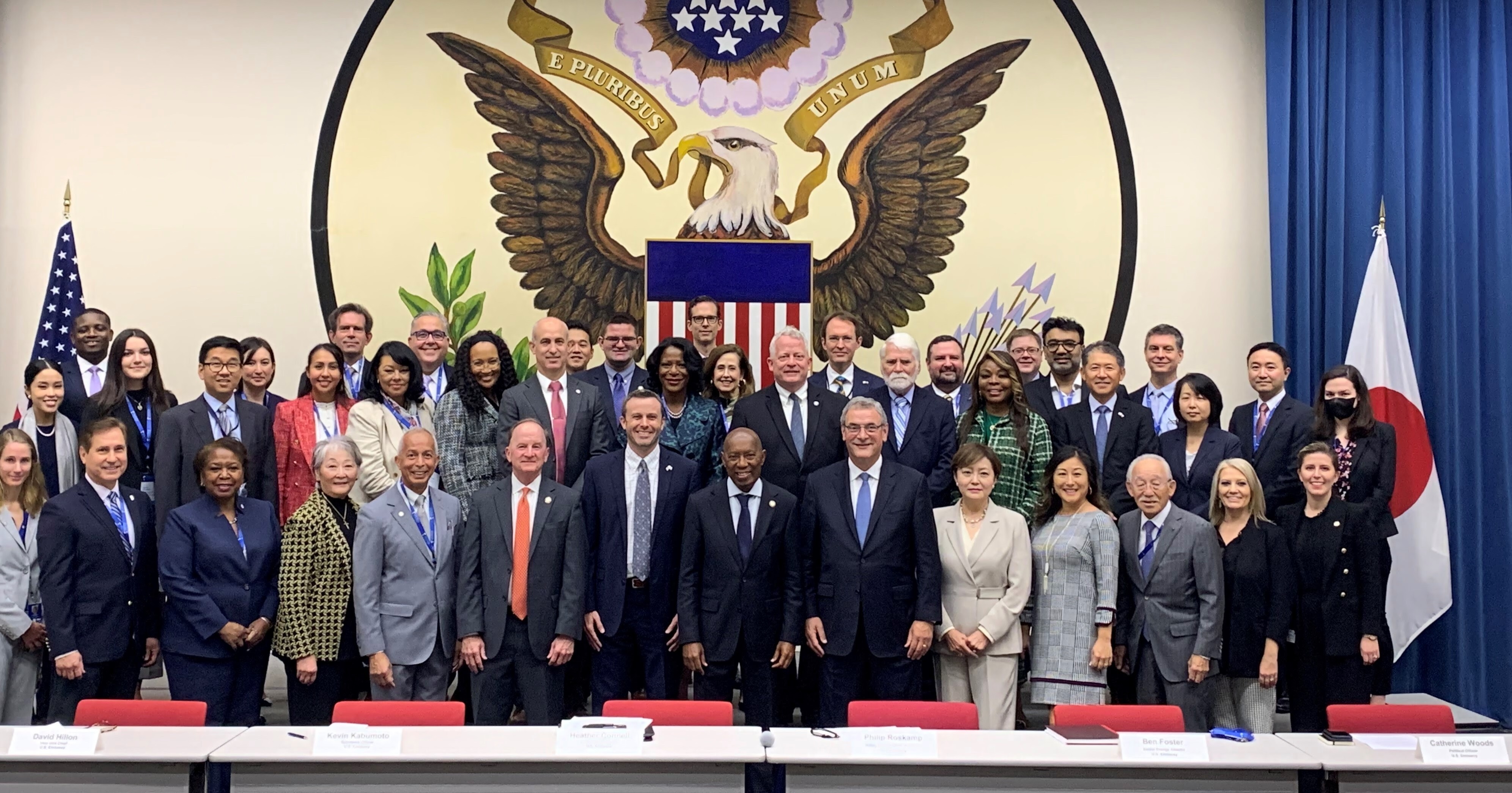 Delegation briefing at the U.S. Embassy in Tokyo

Houston Mayor Sylvester Turner and the Greater Houston Partnership embarked this week on an investment and trade mission to Japan to establish new avenues for cooperation in energy, innovation, advanced manufacturing, life sciences, and transportation/mobility.

During the week-long mission, Mayor Turner, Partnership CEO Bob Harvey, and delegates will meet with high-ranking government leaders and business executives in the Japanese cities of Tokyo and Chiba to promote Houston’s economic, governmental and cultural ties. The mayor also is scheduled to speak at the U.S.-Japan Council 2022 annual conference on the topic, "Leveraging Subnational Action to Solve Global Problems."

Day one of the official engagements included a briefing at the U.S. Embassy in Japan, followed by a meeting at JETRO. This nonprofit organization connects businesses with the resources they need to expand successfully to Japan.

Later in the week, the delegation will travel to Chiba to commemorate the 50th anniversary of the sister-city relationship between the City of Houston and the City of Chiba. Mayor Turner will join the mayor of Chiba to reaffirm the Sister City Agreement executed on October 24, 1972, and vow to continue working in unison for the mutual benefit of our cities and people.

"Houston’s Sister City relationship with Chiba City, established 50 years ago, is one example of the friendship that has contributed to our robust trade relationship," said Mayor Turner. "The relationship between the Port of Houston and ports in Japan are key to this trade growth, as is the more than 70 companies, including Daikin, Mitsubishi, and Toshiba, that continue to make major investments in our City."

In 2021, Houston-Japan trade surged to a decade-high of $12 billion, according to the GHP. The increase in total trade can be attributed to the rise in the import value of industrial equipment, computers, electrical machinery, and parts, and motor vehicles and parts, as well as an increase in the export value of fuels and refined products, plastics, and plastic products, and organic chemicals.

"The Greater Houston Partnership is excited to partner with Houston Mayor Sylvester Turner on a trade and investment mission to Japan, the largest foreign investor into the United States and one of Houston’s top 10 global trade partners. Trade between our regions has more than doubled over the past decade, and Houston is home to an impressive set of Japanese firms,» said Partnership President and CEO Bob Harvey. «International missions are an important part of our effort to strengthen Houston’s ties with our partners around the world and we’re looking forward to the discussions that will take place in Japan."

"Japan is Houston’s fourth largest Asian trading partner. Over the next several days, I will focus on encouraging Japanese companies to increase their business in the City of Houston. We have the workforce and infrastructure and can offer a stable and reliable partnership," said Mayor Turner. Other engagements during the investment and trade mission will include a briefing and ride on the Japanese bullet train in coordination with Texas Central Rail and Japan Central Railway.

The night before returning home on Oct. 30,  the delegation will attend the Houston Ballet’s first-ever performance of Stanton Welch’s Swan Lake.in Bunka Kaikan in Tokyo, Japan.

Delegation briefing at the U.S. Embassy in Tokyo

Statement on Trade and Investment Mission to Japan

Context: The Partnership and Mayor Sylvester Turner will lead a mission to Japan October 22-30.  Statement Attributable to Bob Harvey, President and CEO, Greater Houston Partnership  “The Greater Houston Partnership is excited to partner with Houston Mayor Sylvester Turner on a trade and investment mission to Japan. The week-long mission will include a series of high-profile business and government meetings in the Japanese cities of Tokyo and Chiba with the goal of establishing new avenues for cooperation in the areas of energy, innovation, advanced manufacturing, life sciences and transportation/mobility. Japan is the largest foreign investor into the United States and one of Houston’s top 10 global trade partners. Trade between our regions has more than doubled over the past decade, and Houston is home to an impressive set of Japanese firms. International missions are an important part of our effort to strengthen Houston’s ties with our partners around the world and we’re looking forward to the discussions that will take place in Japan.”
Read More

The Greater Houston Partnership hosted Her Majesty Queen Máxima of the Netherlands on Friday, September 9, as part of a Dutch working visit to Texas.   This event was organized jointly with the Embassy of the Kingdom of the Netherlands to the U.S. and focused on the economic ties and shared societal challenges between the Netherlands and Houston. Her Majesty was accompanied by a delegation of CEOs and Ministers from the Kingdom of the Netherlands. The Netherlands and the United States maintain a long-standing partnership that has created jobs, investments, and opportunities for both nations. When examining U.S. trading partnerships on a global scale, the Netherlands is the trading partner with which the United States has the largest trading surplus.  In 2021, Dutch-U.S. economic ties supported an estimated 955,000 American jobs, (an 11% increase from 2020) and an estimated 106,000 of those jobs were based in Texas (a 24% increase). The Netherlands remains one of Houston’s key strategic trade and investment partners. Trade between our regions was valued at $13.8 billion in 2021, a ten-year high, and Dutch businesses support more jobs in Texas than in any other state in the nation.    “Visits like today’s with Her Majesty Queen Maxima and her business delegation from the Netherlands present an incredibly unique opportunity to exchange views, share experiences, and identify opportunities for further strengthening collaboration with our international partners,” said Partnership President and CEO Bob Harvey. “As established global energy centers and port hubs, there is an abundance of opportunities for Houston and the Netherlands to engage on issues like climate change, resiliency, technology, and more.” An impressive group of over 150 business executives and governmental leaders from both regions participated in Friday’s events. At the conclusion of the CEO Roundtable an official memorandum of understanding was signed in the presence of Her Majesty outlining the strong commitment to the bilateral relationship between The Netherlands and Houston in the areas discussed. The MOU was signed Bob Harvey, President and CEO of the Greater Houston Partnership and Ingrid Thijssen, President of VNO-NCW –the largest employers organization in the Netherlands.    Learn more about Houston's international business and trade relationships.
Read More