About
/
Board of Directors
/
Leslie Duke 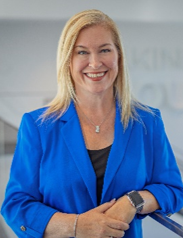 As leader of Burns & McDonnell's Houston, Austin and Oklahoma City offices, Leslie Duke plays an integral role in leading the firm's engineering, procurement, and construction (EPC) business in the Gulf Coast and Southwest region. Her ongoing efforts in building and growing the business include the development and successful execution of over 100 multimillion-dollar projects and expanding Burns & McDonnell's customer base from one client in 1999 to more than 100 today across a broad spectrum of industrial sectors including the refining, chemical, manufacturing, and utility markets. She also plays a leading role in the development of large-scale, national alliance relationships, resulting in over a billion dollars in repeat, non-competitive awards. Ever focused on the development and growth of her teams, Leslie created a a leadership training program focused on maximizing the performance of high-potential staff via accelerated career training. Leslie joined Burns & McDonnell in 1999 and served as a regional manager in the Transmission & Distribution group from 2002 through 2009, as well as the operations manager in Houston from 2005 to 2009. In 2010, Leslie moved to Dallas to open Burns & McDonnell's 10th regional office and helped diversify the firm's services in the region and expand the company in north Texas. The Dallas and Fort Worth offices specialize in on-site energy design, facility design, transportation design, environmental services, and design-build construction services. In July 2012, Leslie returned to Houston as general manager and, in 2016 she was named the first female president in the company's 120+ year history. With over 700 employee-owners in the offices under her purview, Leslie's operations focus primarily on the permitting, design and construction of high-voltage power, refining, chemical, terminal, and pipeline facilities. Leslie is honored to lead our firm's largest and fastest growing office and looks forward to a promising future in the region. Throughout her career, Leslie has remained very active in community organizations and received numerous personal awards. Texas Tech University recently honored Leslie as a 2018 Distinguished Engineer. Additionally, Leslie was named to the 2016 "Who's Who in Energy" list published by the Houston Business Journal. The United Way of Greater Houston also recognizes her as a "Top Female Leader" for her strong commitment to United Way and the community. A lifelong Texan, family is paramount to Leslie and she credits her father's leadership and strength through adversity as her most significant influence. She and her husband, Travis, have two children, Justin and Kendall; and Leslie spends most of her free time with them, traveling, and remaining active in her church.